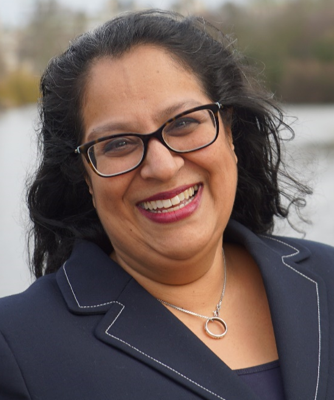 Mel heads Government’s litigation, leading 600 people litigating key cases of the day and having the UK’s largest caseload in the Supreme Court.

Mel started life as a barrister and since joining government in 1998 has worked in a variety of departments including the Cabinet Office and Number 10. Most recently at the Department of Health and Social Care, Mel led the legal work across Whitehall to deliver Government’s COVID-19 response. She also led on EU Exit, NHS reform and such ground-breaking ethics cases as the Charlie Gard case.

Over a 23 year career as a government lawyer Mel has advised on key constitutional changes such as the Human Rights Act, devolution, House of Lords reform and freedom of information, and a range of policies of national significance such as the Civil Partnership Act, academies and free schools and airport expansion.

Mel was highly commended in the Asian Women of Achievement Awards 2020 and appointed Companion of the Bath in the 2021 New Year’s Honours List. She is also a non-executive director for an adult education organisation.