Is blockchain the train that still hasn't arrived?

If you believed all the hyperbole about blockchain you’d think we were on the cusp of the greatest technology development we have ever seen.

Blockchain – essentially a technology which produces a distributed ledger - has  been touted as having the potential to make an impact on many different areas of businesses and our lives, including solving some different problems; it’s even been suggested as providing a solution to the Irish border problem which has made the Brexit talks so complex.

And some of the opportunities are certainly of interest to lawyers including those in-house, for example the development of smart contracts, opportunities for advisory work and potential innovation.

Now it really could be that blockchain does revolutionise the way we do business and interact with institutions, and it could be a major disruptor to some industries, but to date blockchain’s impact is relatively limited.  There is a gaping chasm between some of the excitement behind it’s potential and the actual progress that has been made.

Take an article with a very shouty headline  - “How blockchain is revolutionising the legal sector”.  Taken at face value you’d think something incredible was stirring - but actually reading the article (which is much better than the headline) it’s clear that the elements are more modest; a few law firms are creating advisory opportunities, running some pilots and fielding the odd evangelist to speak to the media.

Where are the results of the exciting early experiments, the proven early adopters and the verified successful outcomes of blockchain?  For example, a recent look at how blockchain can be used for to support international development efforts, examined case studies and also contacted several blockchain firms, and found no documented evidence (and no blockchain company willing to provide any) which demonstrated the impact of blockchain so far.

Recently the Australian’s governments Data Transformation Agency spent $AUD 700,000 on researching how blockchain could be used in government departments, but concluded that it was too early in its development to be currently useful and that a lot of “noise” was coming from vendors in the area.

While blockchain can polarise opinion partly because of the overinflated claims – there are some who are very sceptical about it – it’s also wrong not to dismiss it. A recent BBC article details some of the companies who are actively investing in blockchain technology, while Cap Gemini recently published a report which sees huge growth in the area of the supply chain.

Blockchain is a train that still hasn’t arrived at the station and which is subject to a lot of vendor noise, media excitement and a lack of clear understanding about exactly what it is and how it is going to help. It needs to be looked at with a level-head. That doesn’t mean we should be sceptical about its potential - it is perfectly possible that advancements will be made in 2019.

The Bigger Picture Technology And Innovation Cyber security and risk

Viewpoint / Delivering Services Technology and innovation in the in-house context 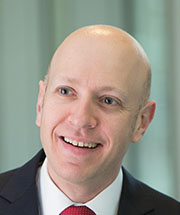